With more than 30 years in the off-the-road (OTR) tire market, Bruce Besancon, Yokohama Tire Corporation’s (YTC) senior director of OTR sales, has seen it all. Having joined YTC in April, the former vice president of marketing at Alliance Tire Americas looks at the issues affecting the OTR market and what we can expect in 2018. 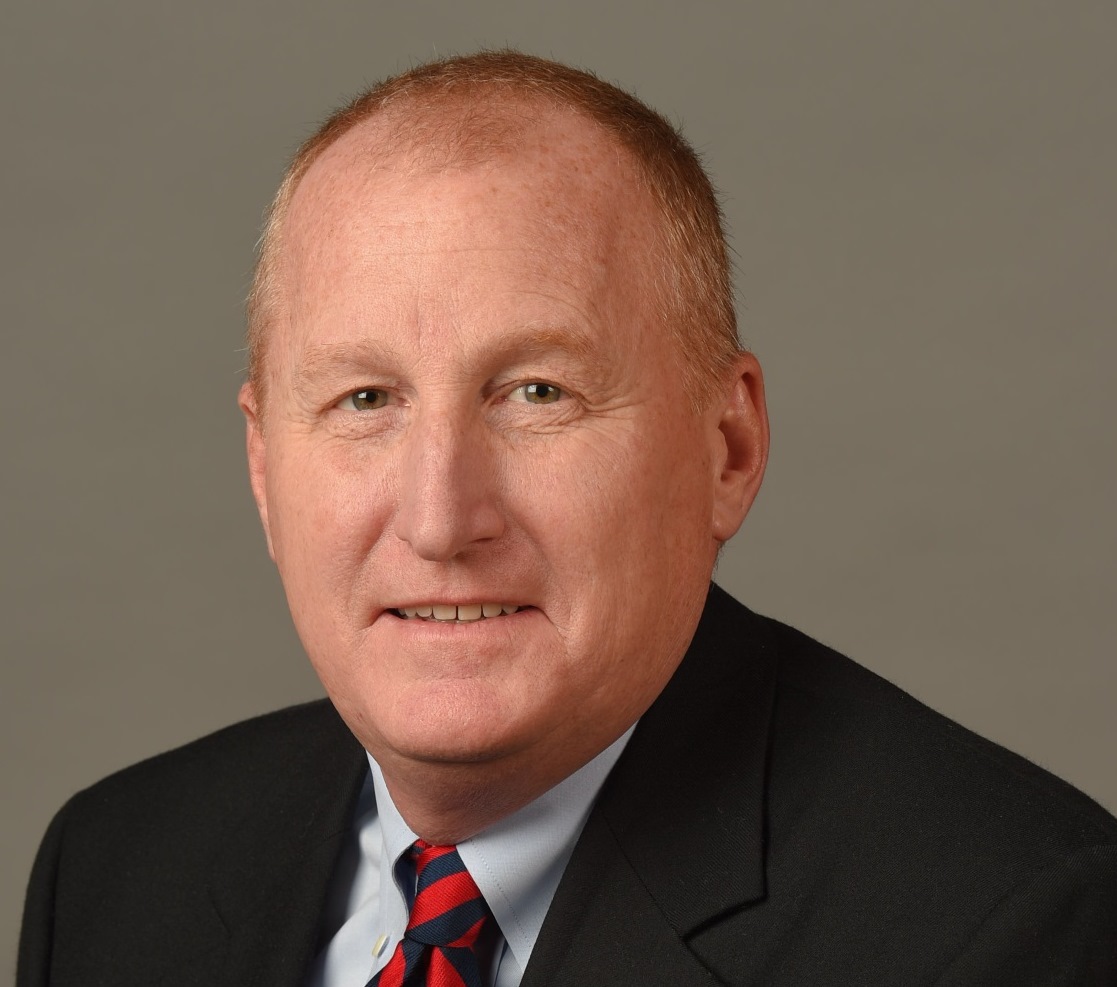 Question: Industry-wise, how’s the OTR market been this year?

Bruce Besancon: We’ve seen a very good OTR market in 2017. It’s not up to the 2006-07 levels, which was the peak of our industry, but we’ve definitely come through the 2009 and 2013 dips. We’ve been on a pretty steady increase for OTR. The big areas that are really showing great improvement are in what I would call the more industrialized applications: the smaller tire, the port and rail, small construction and small quarry.

If we look, we can go back and trace a lot of this to the housing market, which is well over a million units per year start, and we’re at a pretty good GDP right now. Those things add up to a healthy increase. We’re seeing better than five percent growth in our industry overall.

Don’t forget that housing always entails more than just housing. You have to have new road and utility construction that goes in. New shopping centers, restaurants and hotels tend to go in with those.

The port business looks like it will double in the next six to seven years across the U.S. We’re importing a lot of goods, but we’re also exporting a lot, which is great for everybody’s economy.

The one thing that we’re all watching is what’s happening with the original equipment market. It can either be a leading or a lagging indicator. Today we’re starting to see it pick up, which is really good news for us as we look beyond ’17.

There’s also been an upturn in the coal market, particularly the underground coal in the east. We haven’t seen that in a few years and that’s been a very welcomed increase in business. Large, heavy mining is probably at an equilibrium state. It’s not tremendously growing or shrinking. I believe the fleets are where they need to be. We’re waiting to see what the markets are going to do, whether they can really grow or not.

Question: Putting on your forecast hat, how does 2018 and beyond look?

Besancon: I’ll be like pretty much any economist and say we’re moderately optimistic. There’s always a bit of caution. We’re not in this huge, hyper-expansion of the market. We’re in a slow-to-moderate range increase of business, which is good.

It appears the current U.S. administration has helped our coalmining industry, or at least given some benefits to industries that has helped us out. We don’t see any of that changing. It’s actually been a pretty decent business climate for the last year. Everybody we talk to appears optimistic. I believe we’re probably in for another plus-five percent to six percent market as we go into 2018.

Question: When you start doing your forecasting, do you look at specific businesses that might need OTR tires?

Besancon: That’s exactly what we look at. To do it effectively, we have to look at each business segment and each geographic zone so that we make sure we have the right mix of product in the right area.

Question: You’ve been in OTR for many years and know about the industry’s incredible peaks and valleys. Right now, it looks like you’re on an uphill swing.

Besancon: It looks like we’re in an increasing mode, and yes, we’ve seen our share of ups and downs. Whereas most markets don’t change 10 and 20 percent, the OTR market has year-on-year in the recent past history. We’re not in a giant expansion mode or looking like we’re going to fall off a cliff. It appears that we’re in a much more stable atmosphere. Obviously, world events could impact that. I don’t want to go too far out there, but I feel comfortable as we look over the next few years that we’re not seeing a huge danger sign in our industry.

Question: You mentioned world issues affecting the industry and Yokohama. What are some of the other hot issues in OTR?

Besancon: Definitely the economy, which always plays a huge role in our industry. The OTR industry is very closely associated with GDP, because a huge part is dependent upon construction. Hurricanes Irma and Harvey had devastating effects in the Texas, Florida and the southeast region, but that will probably not create tremendous increases in our business like some people believe. There’ll be a big flurry of activity and then it will become more of a progression. Those areas are going to have to rebuild for a large amount of time. You won’t see it happen in one fell swoop.

I think we’ll see a continuation of our coal business, as long as government regulation remains moderate and businesslike. The heavy metals and largescale mining is heavily dependent on the global economy. It looks like there has been some uptick in heavy metals and heavy mining activity. Oil is always a big consideration, particularly with the oil sands in Canada, which is a large mining area.

Also affecting the industry, quite honestly, is the amount of competition in the market today. There’s been a lot of discussion about tariffs imposed, but we don’t know where all those are going. As we saw last year, many people were aiming at a lot of import companies, particularly those from emerging market areas. We’ll have to see how that plays out.

There’s a lot of people making a lot of product these days, as opposed to the early 2000s. It doesn’t appear we’ll have a huge deficit in production. However, there will probably still be some specific tires that will have some relative shortages as they go forward. Everybody’s trying to make sure they’re adjusting their production correctly.

Question: How does Yokohama stay ahead of the game with the proliferation of tires from different countries?

Besancon:  The only way we can really stay ahead is with our dealers. The one thing that Yokohama has at its core, particularly in OTR, as well as in the commercial and passenger divisions, is our respect for our dealers and how we go to business with them. We’re not trying to mandate or roadblock them from anything.

The one thing that I’ve found in my first six months at YTC is that we are a very dealer- and customer-centric organization and we bend over backwards to help them out. We’re relying a lot on them as the first indicators of what’s happening in the market. We’re trying to maintain our spots with them and with that, we have to maintain our quality level. That’s a basic to get into the market these days. Everybody has a good product. It’s the ones with higher quality, service and great reputation that succeed.

You have to realize it’s not just the sale of that one tire. It’s the sale of continuity of tires and the service and everything that goes into them. We have to have the quality product at the right price at the right time in the right place. The dealer has to provide a safe working environment, good service to the customer and a good working relationship. I think if we have all three of those together and we’re all working toward the same end goal, we’ll be successful.

Question: Was that the reasoning behind the new OTR dual marked tires?

Besancon: Exactly. The end game is that it helps customers and dealers. With both E and L designations on the sidewalls, the dual marked tires can be used for both loader and transport service applications. Now customers won’t have to have two or three types of tires for different applications. They can have one tire for multiple types of machines, whether it’s a loader or articulated dump truck. The dealer only has to stock one tire versus two or three different ones. That’s a great economic driver.

Question: Looking ahead to 2018, what’s in the OTR pipeline?

Besancon: We just announced the dual mark tires. In 2018 we’ll be expanding our range of radials, particularly as we look toward getting in some of the larger haul truck radials that even go into the large mining areas, where we believe a lot of people are looking for a very good tire that doesn’t have somebody else’s name on it. We’re also looking to expand in a lot of tires that go into the construction area as well. I just got back from Japan, talking with our R&D and production folks. We have a very good plan on tap, not just for 2018 but also several years after that.

Question: You were with ATG, which is now owned by YTC’s parent company, The Yokohama Rubber Co. Ltd (YRC). How is the transition between the two companies going and what can the industry expect to see with the Yokohama/ATG acquisition?

Besancon: Having been an employee at ATG, I was exceedingly excited when YRC purchased us. Now I’m very excited to be on the YTC team going forward. The direction we’re going – for the foreseeable future – is we’ll operate as independent companies. I think that’s to give each company their margin of independence, but also each has a little bit different fitting inside the market, whereas there are a lot of products that Yokohama doesn’t carry that ATG does. By the way, we share a large number of dealers.

Question: How have the dealers reacted?

Question: Will Yokohama and ATG share booths at trade events?

Besancon: We’ve already begun doing that. At ConExpo, there were some ATG tires in the Yokohama booth and vice versa. We’ll always do the things that make sense, such as having Yokohama passenger tires in the ATG display at the last Farm Progress Trade Show in Illinois. Why? What does every farmer own? A pickup truck. It’s a great market. We shouldn’t ignore those things and we’re not. Again, we’re looking for the best ways to use the synergies between both companies.

Yokohama ranked No.9 largest tire manufacturer in world 2017 by revenue 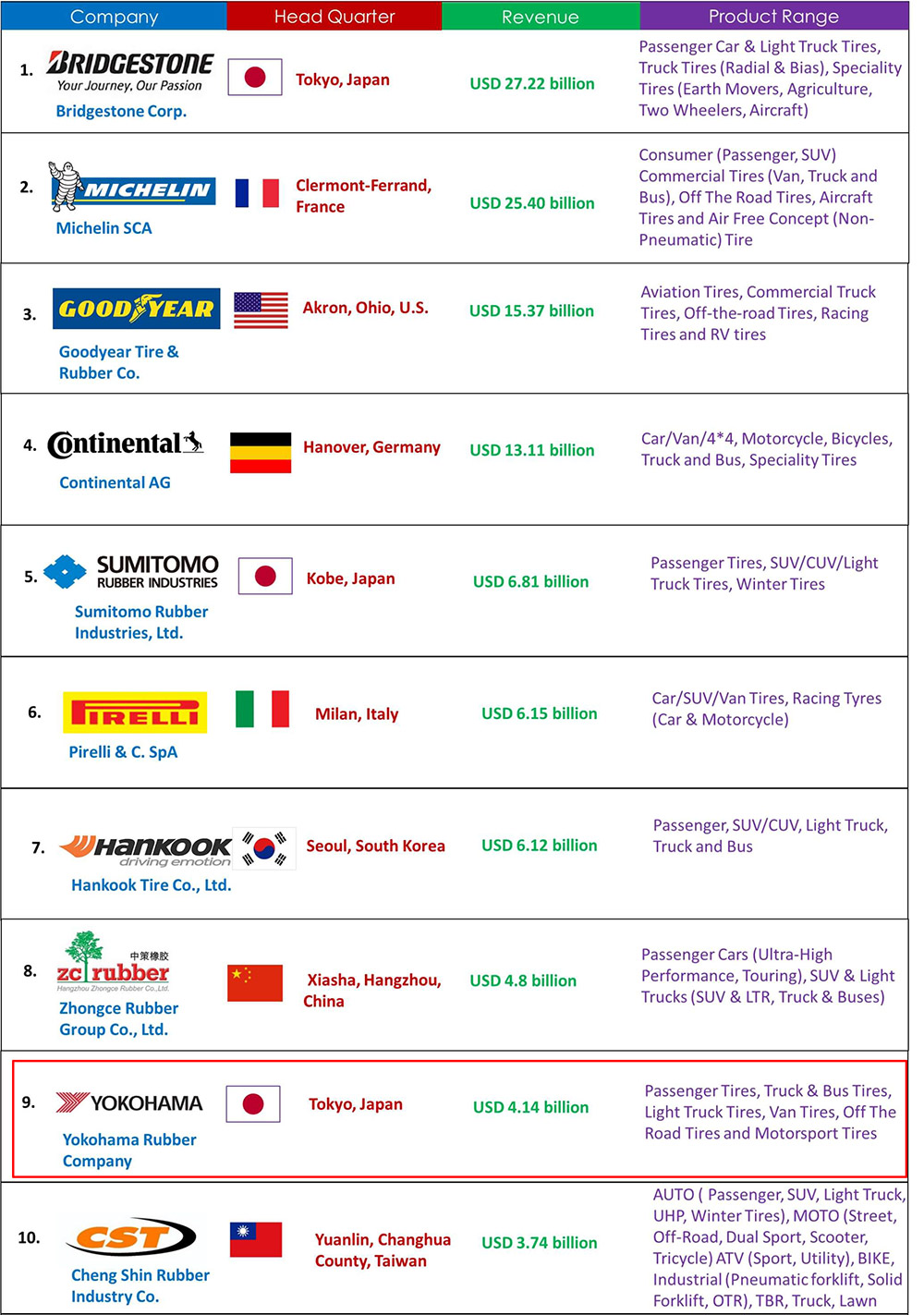